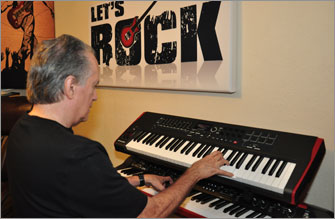 Recording used to be accomplished by putting a group of musician into a recording studio, microphoning each player, separating them as space allowed and recording....basically a live performance. As multi-track recording gained ground in the 60's, (4 & 8 track recorders) engineers were able to record individual parts separately, allowing more control over individual instruments. During the 70's & 80's multi-track machines with 32 tracks, and 64 tracks became the norm in all major studios. However, it was still real musicians performing real instruments.

As digital recording on computers started to take hold in the 90's through today, it has revolutionized recording and given engineers the ability to "sculpt" sounds and performances to an unprecedented degree.